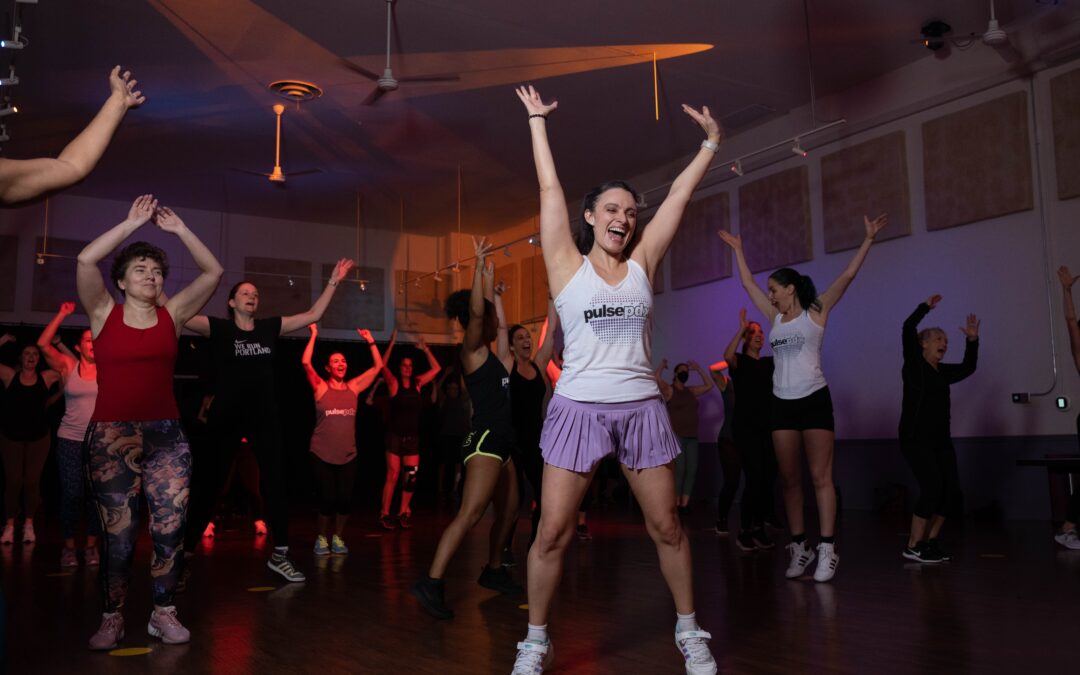 I grew up near Los Angeles in Long Beach, California, where about half of the people had swimming pools. We happened to be one of those people, and because my mom is afraid of getting in water, she put me and my sister in swimming lessons every day of every summer. Turns out swimming laps is boring, especially since I’m slow and have no desire to swim fast and beat other people. I tried other things that the pool had to offer, but I’m too much of a scaredy cat to do diving, so I ventured into synchronized swimming. I was always interested in dancing, and I wanted to do both, but my parents told me I could either try out for the synchro team or take a hip hop class. Being a Taurus, I was thinking long term, even as a 12 year old, so I tried out for the synchro team. Now synchronized swimmers are a quirky bunch. We aren’t good at ball sports, we’re too afraid to do gymnastics and not aggressive enough for water polo. But we also have a flare for the dramatic, drenching ourselves in sequins and glitter, wearing theatrical make-up, and a willingness to squish our noses with noseclips, put Knox gelatin in our hair, and swim upside down not being breathe or see since we don’t wear goggles for competitions.

The scariest moment for me was when I was swimming my duet at a competition, and while my duet partner and I were underwater, my sequined hairpiece got stuck to her sequined suit by her stomach, and I couldn’t get free. Well I should’ve been worried about drowning, but I was more worried about not getting first place. I obviously had misaligned priorities á la Hermione Granger.

I competed for 4 years but quit too soon, which is something I have always regretted. I moved on, worked as a lifeguard and swim instructor, graduated in Studio Art from UCSD, studied/made art at L’Academia de Brera in Milan, Italy, and even lived in Suçeava, Romania for a bit. We lived in San Francisco for a few years, and I found an LGBTQIA master’s synchro team that I wanted to join but wasn’t able to because of childcare issues. We moved to Portland, and lucky me, they had a master’s synchro team here, except that it was in this weird exclusive club that I couldn’t get into. I talked to the coach, who said that if I coached the kids, choreographed routines, and judged at meets for 5 years, I could swim on the team. I’ve been swimming with this team for about 11 years now.

We compete at Nationals every year, and I’ve competed at World’s in Montreal and Italy, and sometimes we compete at Gay Games and International Gay and Lesbian Aquatics competitions. We have our sights set on Guadalajara, Mexico for Gay Games 2023. Our oldest swimmer is in her late 70s, and some of our swimmers have been swimming together for a few decades, which is really inspiring to us young’uns. We also started a synchro troupe called Rosecity Raindrops that allows other synchro swimmers to be a part of our team. We don’t compete, but we do performances for events and have performed for Make a Wish Foundation, performed in music videos for Y La Bamba, Blind Pilot, and Laura Cortese and the Dance Cards, and been filmed in a movie called A Kaddish for Bernie Maddov. It sounds glamorous, but it often involves getting in a river at 6am for hours while not being able to see your teammates through the murky water. While we use an underwater speaker at the pool, we can’t use one in open water, so we stay on the right count with our choreography while someone beeps the counts underwater with their voice while still holding their breath. The producers never know what they want us to do, so usually we are choreographing and practicing on the fly, all while staying synchronized and smiling, making it look rehearsed and graceful. One time we had to do a peel-off dive that was being filmed, where we dove in one at a time into the Puget Sound in October while the sun was going down. I was the first one to dive in since I’m the shortest person on the team, and we line up in height order. I am slightly fearful of swimming in open water, but make it dark and empty of other swimmers, and I get a little panicky. We had to do it in one take, and I botched the whole thing because as I was diving, I screamed, and startled everyone after me, making them dive crooked and on top of each other. Oops.

I hate missing out on whatever is going on with my team so much that I was swimming at practice when I went into labor with my second child, went to the team BBQ afterwards, gave birth (not at the BBQ), and then competed in New Mexico with them 6 weeks later. Being in a sport and dancing has taught me the importance of loving my body. Releasing the constant worry of how my body looks and instead, appreciating all the amazing things that my body is capable of doing. I try to project that I love my body to my kids, and that they don’t need to diet or work out to be in shape, but to find something that they love that gets their body moving. One piece of advice that was given to me that I try to live by is instead of focusing on weight loss, which is not a completely accurate indicator of health anyways, make goals for yourself that have to do with ability, like holding a plank for a minute or stretching to be able to touch your toes. Some of my goals since starting Pulse have been to go through Jennifer’s Burn plank track without modifying, increasing my endurance to do POP Pilates and a dance class, making up at 8am on the weekend to take WERQ, and attempting to do the jumps in a song (I jump as high as a 2 year old). My new goal is to be able to squat all the way down like Danny does in his classes.

One of my hobbies/jobs is sewing, which I’ve been doing for about 20 years. I have been making costumes for friends, doing alterations for whoever asks, and for a while, I was making and selling children’s sunsuits on Etsy. I recently quit dental assisting to start my own sewing business, where I make synchro competition suits, workout clothes, costumes, and mostly whatever else someone commissions me for.

I had a weird upbringing when it came to dancing. I wasn’t allowed to dance, but really wanted to since it was so prevalent in the culture of where I grew up. I was raised in a strict religious cult where we were not allowed to do a lot of things, like listen to “secular” music, read mainstream books like Harry Potter, watch certain tv shows like the Smurfs, go on the Haunted Mansion ride at Disneyland, or celebrate Halloween. So needless to say dancing was not allowed. It was taught to us that dancing was a sin and therefore prohibited. But in juxtaposition to this, I grew up in the hood of Long Beach. It was dangerous and scary with at least two ghetto birds hovering in the sky, and there were a lot of drivebys, shootings, break-ins at people’s houses, gangs, and *gasp* rap music. But with that culture, there was also a lot of life, music, salsa and hip hop dancing. People had swag and great dance moves. Everyone knew how to twerk or at least do a few basic salsa steps at kid’s birthday parties. Once I turned 18 and moved away, I’ve been trying to catch up on normal experiences that I missed out on like dancing, and I knew that energy that I saw in my neighborhood was in me too.  About 5 years ago, I decided to try something scary and try a dance exercise class even though I didn’t know how to dance. So I got really brave and looked up a class schedule and picked a class to go to. Then I didn’t go. But eventually I made it to a Zumba class where I hobbled my way into learning some dance moves.

Covid has been horrible, but a few good things came out of it for me, and one of those was finding Pulse. Once all exercise classes were canceled, I was looking for something online, and a fellow parent from my kid’s school recommended Pulse to me. I’ve been at Pulse now for a little less than a year, but I’ve got it bad and go to Pulse around 6 days a week. I’m supposed to be training outside of synchro practice time but who wants to lift weights and swim laps? I’d rather do Burn, POP Pilates, and have fun dancing! It’s so easy to lose myself in the music and dancing. My body has so much freedom dancing, there’s no water, no nose clips, I can breathe AND sing (you’re welcome), I can move my hips, not be kicked in the head if I’m too close, there are no concussions, and best of all, no getting up at 5:30am in the dark to go compete in a cold pool.

Sweat running down my face? Great!

Song is a little too quiet/loud? That’s ok!

Did I completely mess up? Who cares because I’m having fun!

You really bond with the people you do sports with, and in the same way, I feel like I’ve found my new “team” at Pulse. I find so much joy in this community that is made up of great and kind people who love doing what I love doing, and this positive energy is created from doing that altogether. I can come, be my weird self, dressed up crazy and dancing with flailing limbs, and it’s a safe and accepting space.

Pulse has that soul and flavor that I’ve been missing since I moved out of Long Beach. It’s an emotional release, and don’t mind me or come join me if you see me dancing like a loca or with my eyes closed.

Pulse brings joy, peace, balance, and sparkle, and it is also a harbor when there are storms raging in my personal life. One of the things that makes Pulse special is their amazing instructors; I have learned something from every single one of them. Thank you all for bringing your talent and special pizazz, and for all the time you put into writing and practicing routines. The instructors don’t just lead classes, they are a huge part of forming the community. I was so surprised the first few times that they came up to me to talk and get to know me. They really are the heart and soul of Pulse.

Come say hi to me because I consider myself still fairly new and would like to meet more of the people who make up Pulse!