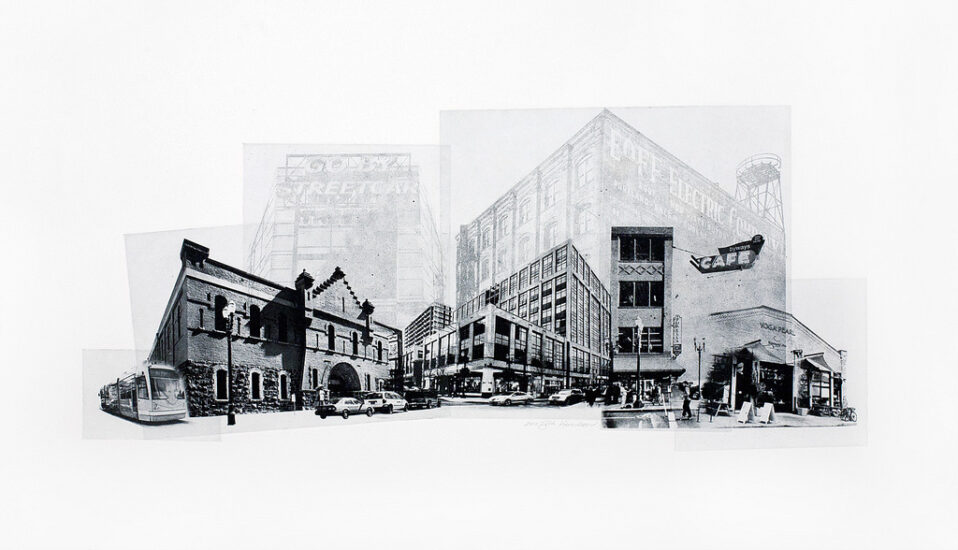 Pulse PDX gallery is pleased to announce a new exhibition of artwork by 4 artists using the shared visual vocabulary of the urban landscape. While each artist has a unique point of view, their combined works hold together as a theme through their use of similar elements: explorative looseness, expressive color and texture, and a shared interest in the urban environments that surround them.

Beth Kerschen blends architecture, urban details and fleeting moments to tell a richly layered story. Her collaged photo etchings remind us of the urban expression of a city: historic buildings, unique skylines, restored vintage signage, or an oddly painted door. Her work captures this humanity of the urban landscape. For her etchings, Beth use a polymer photogravure technique to translate photographic elements into printed form wherein several plates are combined into a single scene. The composite scenes build a narrative that represents how she experiences the world in an attempt to create a feeling of nostalgia, permanence and personality.

Anthony Papini was born in Sacramento, California in 1983. A prolific painter, Anthony’s work has been exhibited in San Francisco at Rollup Gallery, Mojie Gallery and Bocchus Gallery. He is represented in the permanent Collection at the J. David Gladstone Institutes where his painting is displayed with the works of Wayne Thiebaud. In 2011 Anthony completed a painting a day for the entire year. He has been coined as “The Painter of Traffic”.

Ben Friedle is a NY native, living in Portland, who creates natural and industrial landscapes with an expressive use of oil paints, mediums and color. He began painting in 1999 after spending a summer in Moscow and being deeply moved by the abundance of master works in every genre of art. Most comfortable on larger canvases Ben applies rhythm to the brush strokes that you can hear and see. His pieces for this show were painted as a series, where each session was a rapid sprint of freeform painting over multiple applications, without agonizing over the movements. This spirit of expression is rooted in the appreciation for improvisation, originality and musicianship. Our desire for both abundance and pristine landscapes is a paradox. Ben plans to conquer apathy with art.

Scott Erwert is a native Oregonian who lives and works in Portland. As a current member of North Coast Seed studios, he has worked and exhibited all along the West Coast, including: SFMOMA gallery, Gallery One Embarcadero, Oakland Museum of California, Ghetto Gourmet art events, CAP Art Auction, Star Wars Celebration, Comic and Pop conventions nationwide, Multnomah Arts Center, as well as various galleries and event spaces throughout Portland. He has instructed painting events at Portland Art Museum with Bottle and Bottega, and his artwork has been published by Abrams Books, Del Rey, Random House, Scholastic and Lucasfilm. Drawing on two decades of experience, his work meshes classic education and a respect of art history, with personal innovation and discovery of the world around him.