Spotlight on Aisha B 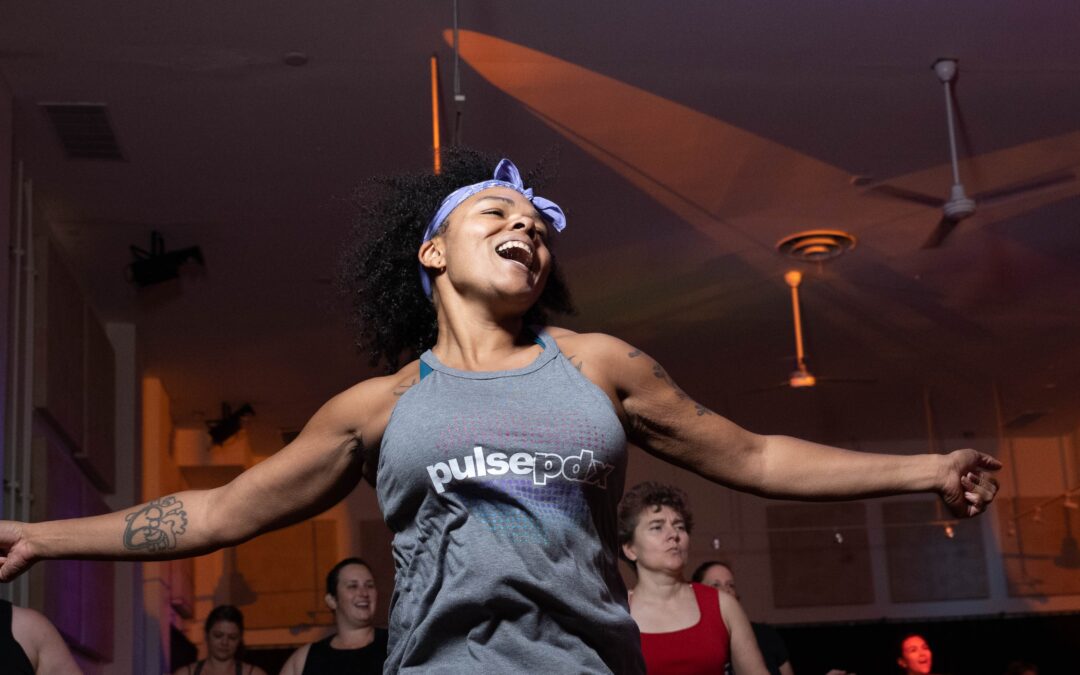 What are some highlights of your fitness journey? 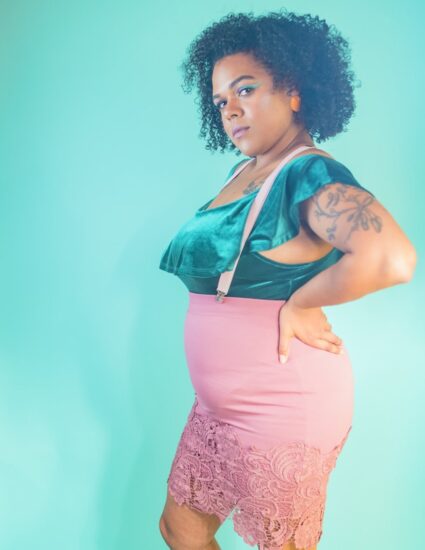 Well, to start, I hate exercise. When I was 4 my mom put me in a ballet class that I stopped going to after a little boy made fun of me. In grade school I hated gym class. Growing up the only active things I did were rollerblading and the one season of basketball I played in high school. During that season of basketball I lost 10 pounds, and just like that my idea of exercise became inextricably linked to weight loss at the tender age of 14. I was overweight and mostly sedentary unless I was going to concerts and walking around New York City. I developed an eating disorder and starved myself to what I thought was an acceptable weight. I made myself go running, especially in hot weather. I was an unhealthy mess. I am also a person with major depressive disorder and anxiety disorder, but the diagnosis and treatment didn’t come until I was nearly 30, and those didn’t help with my eating habits and activity level before then.

A while after college I moved to Portland in 2009 and followed some friends around for hikes but I never took to it the way I’d hoped. I tried riding a bike but I have too much anxiety to be on a road with cars. I couldn’t find an activity that I enjoyed enough to be self-motivated to do it. In 2011 a friend convinced me to go to a Zumba class with her at 24 Hour Fitness. I wasn’t too enthusiastic about it (remember that ballet trauma from earlier?). I’d been out dancing in my early 20’s a whole bunch and loved it but I couldn’t see how that could translate to exercise. So imagine my surprise when I really enjoyed it. It turns out dance really speaks to my soul. I kept up with it for a year or two but eventually got rid of my membership because I couldn’t commit to it and needed to save the money. 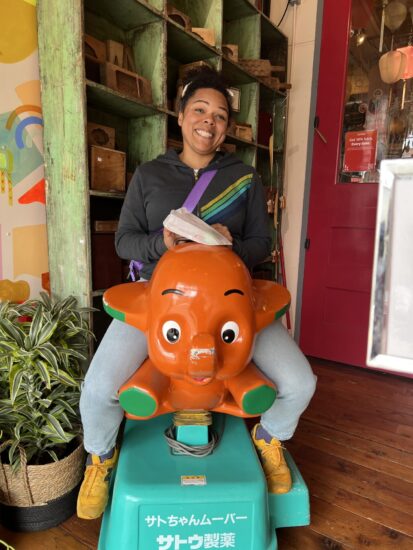 I had a therapist recommended to me when I was having a hard time. I saw Linda for a couple of years, during which she supported me through finding a new job, finding a new medication that works for me, and helped me sort through a lot of stuff. One thing she was always on about was finding some sort of way to be active, and I dug my heels in. Like I said, I don’t like exercise. Her reasoning was that activity would stimulate my mind in a different way, that it would shift the energy it spends on worry and stress and self-criticism over to being in my body and with its movement, to focus on breath and pacing. I had to admit she had a point. So  once the other parts of my life that were taking my energy got fixed up a bit, I had the wherewithal to take this assignment on. So I googled “zumba in Portland”, hoping for something better than 24, and Pulse came up. I hesitated for months and months, feeling intimidated and trepidatious, but eventually, with the support of a friend who offered to go with me, I bought my first 5 class pass and she went with me.

I was hooked. The music and choreography were so different from the Zumba I had taken before, the environment was so comfortable and the community so welcoming, and it took me back to dancing in the club on fun nights out with the girls. That pass turned into a two class per week membership, which after a while that turned into 4 per week just before Covid hit. And I thanked the universe for Zoom classes as they helped keep me sane. I knew being isolated had the very strong potential of sending me into a depressive period, and for the first time in my life I did the healthy thing for my well-being and threw myself into exercise. During the shutdown I started taking more classes and came out of it as a true believer with an unlimited membership. My entire concept of fitness had previously been about losing weight, but it had to shift to being about moving my body for the sake of my mental health. So now for an hour or two I can give my brain a place to go where it is forced to focus on the moment. Instead of worrying about X, Y or Z, I am thinking about my breath, my body, my spacing, the steps and how I can make them different or where I can add a butt-slap, and playing around with my friends. And instead of all my negative self-talk I come away proud of myself.

What role does PulsePDX play in your fitness routine?

I try to take 10 classes every week, Pulse is the entirety of my fitness routine, so, pressure’s on, everyone!

What is your favorite thing about PulsePDX? 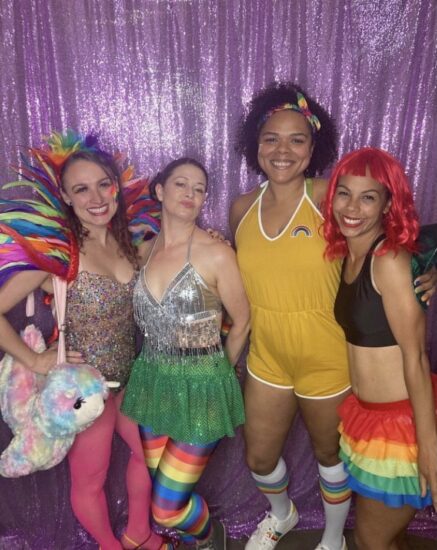 My favorite thing about Pulse is that it is a place where smiles prevail. I think of myself as a rather negative person who is just trying to keep up the practice of not being that way, and it takes a lot of work. I can find misery in just about anything and complaining is second nature to me. But I can’t get away with it at Pulse, it gets overridden. When you walk in you’re greeted with smiles, people are happy to see you, and everyone is there to have fun. The community and energy is unfailingly positive and accepting. And it has the big added bonus of touching on that nostalgia of nights out dancing with your friends with the dark room and lights. No matter what kind of day I’m having I always leave better than I came. Life can be upside down or sideways, but at Pulse you can so easily set it aside for an hour to dance and let it make you smile, and if you need a hug you can just say the word and someone will deliver. It is a place of joy and love.

I’m often at home with my husband and our two very large, needy cats, Oscar and Felix. I work from home as a quality assurance specialist in healthcare, which means I spend my entire day in front of computer screens full of spreadsheets. I watch a lot of TV, play a lot of video games, and listen to comedy podcasts. I like to sew, paint, and do all sorts of crafty things. I love to bake. But mostly I like to eat and talk or write about food, I would say that is my main hobby. I was born and raised on Long Island, NY so I try to take a trip back to visit family every year. I also have some very dear friends in Salt Lake City, UT that I roadtrip to annually as well. I like the beach in any sense of the word, be it sitting in a car looking at the Great South Bay, or at the warm Atlantic, or wrapped up in a bundle at the Oregon/Washington coast or at the river during the summer. Portland winters can be hard for me but being able to get to some beautiful scenery during them can take the sting out of it. 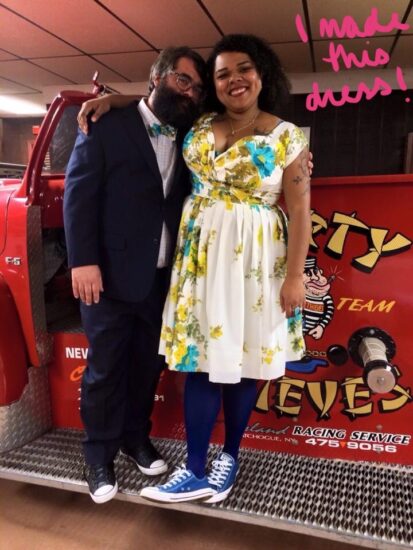 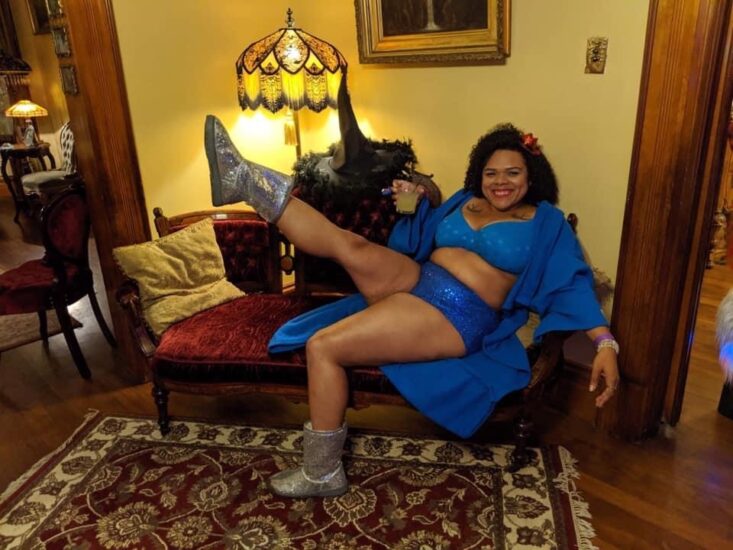